Electric motors are the most common and simple machines which find application in almost all appliances which we have today. Single-phase induction motors are simple, robust and reliable. Fan motor box type capacitors are used in enormous numbers especially in domestic and commercial applications.

Normally single phase induction motor is used in ceiling Fan. We know that for the working of any electrical motor whether it is AC or DC motor, we require two fluxes as, the interaction of these two fluxes produced the required torque, which is desired parameter for any motor to rotate. 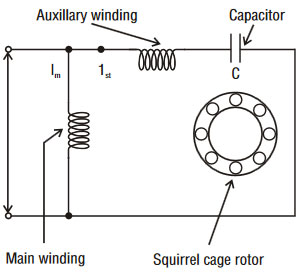 The capacitor shown above is called Fan Motor Run Capacitor. Run capacitors are designed for continuous duty while the motor is powered, which is why electrolytic capacitors are avoided, and low-loss polymer capacitors are used. Run capacitors are mostly polypropylene film capacitors and are energised the entire time the motor is running. Normally fan motor run capacitors are rated in a range of 1.5 to 10 μF, with voltage classifications of 370 V or 440 V. If a wrong capacitance value is installed, it will cause an uneven magnetic field around the rotor. This will lead the rotor to hesitate at the uneven spots, resulting in irregular rotation, especially under load. This hesitation can cause the motor to become noisy, increase energy consumption, cause performance to drop and the motor to overheat.