Capacitors, as we all know, are devices that store charge and give it up when required.

There are many types of capacitors - ceramic, film, mica, paper, electrolytic and tantalum among others. We also know that all capacitors are nothing but a dielectric between two conducting plates.

Both, ceramic and polyester capacitors, are non-polar capacitors unlike an electrolytic capacitor which is polar. That means it has a negative and a positive terminal.

In general ceramic capacitors have a capacitance range starting from 2.2pf to 100mfd with voltage varying from 16 volts to 15kV.

Film capacitors, normally, have a range between 100pf and 1000uf with voltage varying from 50V to 3kV.

Ceramic capacitors are somewhat non-linear in their frequency and voltage responses when compared to film capacitors. Another issue with ceramic capacitors is that they tend to behave as microphones, thus picking up ambient sound and modulating the voltage across them accordingly. What makes them less than ideal in the audio signal path is, most of all, the varying capacitance with a change in voltage. Here's a diagram for various types of ceramics (and it doesn't even show ceramic dielectrics like Y5V): 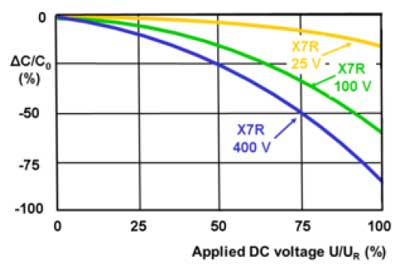 With your audio signal changing, your capacitors change, too. This causes non-harmonic distortion.

Think of a high-pitch note superimposed on a bass note. While your bass note is close to zero, your higher note passes through a capacitor with the nominal value. When the momentary voltage of your bass note is higher, a (bad) ceramic capacitor has a lower value, i.e., your high pass filter has a higher cut-off frequency. This may lead to the higher note becoming damped more strongly.

For audio applications, you will often need large capacitor values. Only non-linear types of ceramics tend to have these.

Film capacitors are quite linear and usually better suited for analogue signal processing.

The new, film capacitor range from Deki provides 1kV and 2kV rating with a capacitance value of 100pf to 10nf.

This twin benefit, coupled with the high capacitance stability of film capacitors, makes them an ideal replacement of 1kv and 2kv ceramic disc capacitors

The best part of the film capacitor replacement for high voltage ceramic disc capacitors from Deki is that you get all this at more or less the same price.

The attached the data sheet has all the relevant technical details.